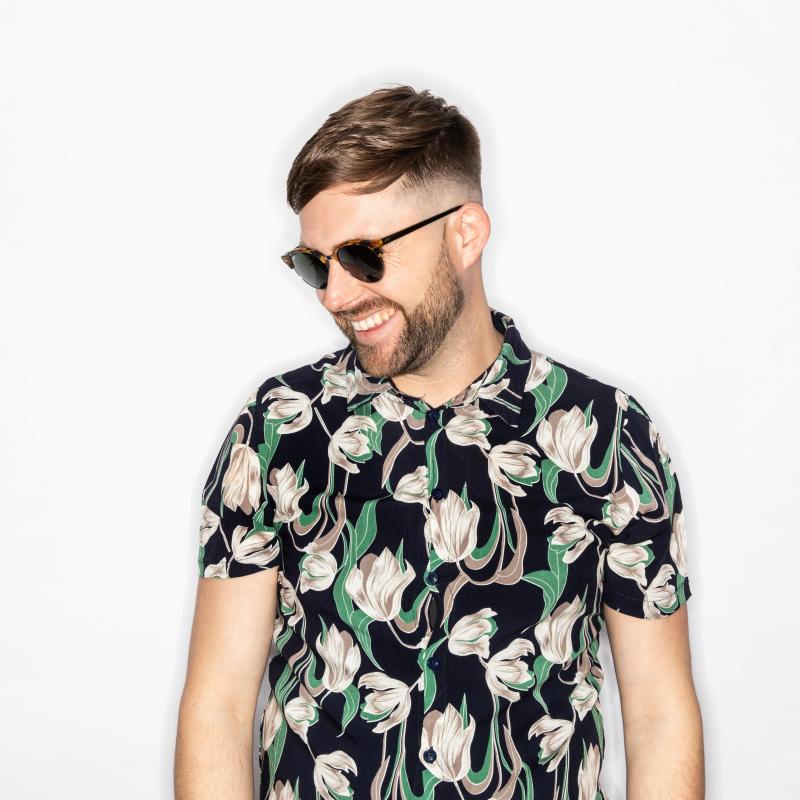 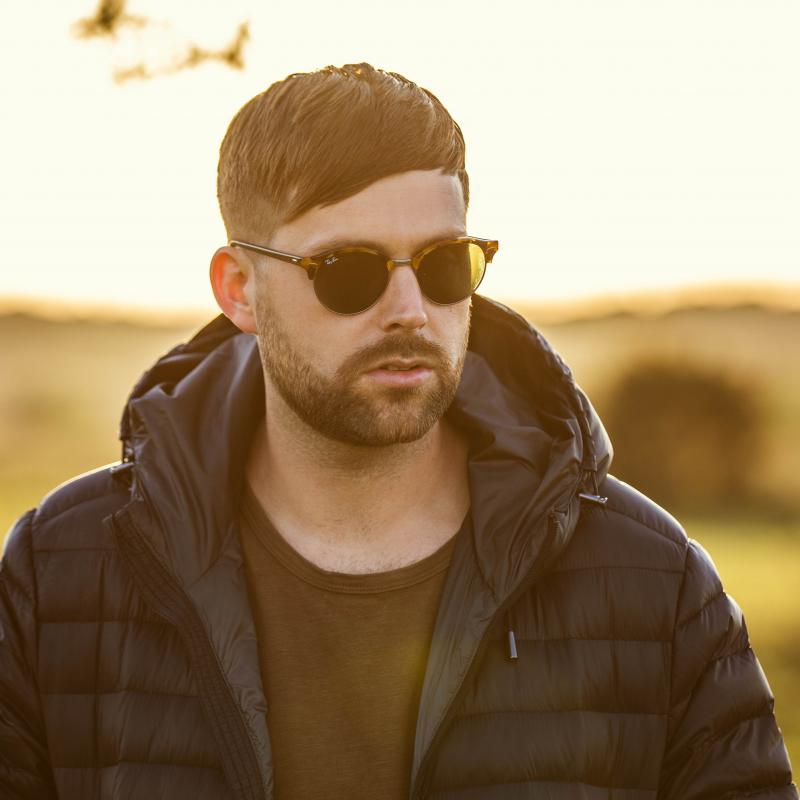 Returning to Knee Deep in Sound, Do Not Sleep resident Ronnie Spiteri continues along his vein of positivity with two blisteringly good original cuts - Indian Rave Hand and Riverside.

Ronnie’s exponential curve began back in 2016 with Jamie Jones supporting ‘Thin & Crispy’ on his Essential mix live recording from Paradise at DC10. Now in 2019, with a Beatport top 20 album, numerous radio one plays and Danny Howard supporting him up as a future star, Ronnie Spiteri is making the kind of music he was destined to make.

‘Indian Rave Hand’ is a tough rolling groove topped off with authentic vocals, catchy stabs and atmospheres. Dirtier than your washing pile after a weekend festival bender, the heaviness of the low end of ‘Indian Rave Hand’ perfectly blurs the lines between tech house and the equally popular warehouse techno sound, making it essential weaponry for peak times.

Next up is ‘Riverside’. Marrying deep house sensibilities with a wickedly addictive stab-led groove, ‘Riverside’ is one of those rolling grooves you never get bored of. Once the vocal kicks in, you’ll be in seventh heaven. Get on these soon, they are already causing carnage in Amnesia! 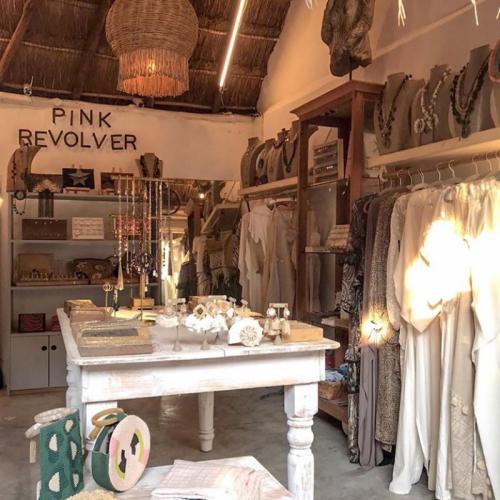 Pink Revolver is a jewelleries and accessories brand inspired by different cultures and trips made by its founders, Megan Anguiano and Manuel Castro. Since their first trip to Tulum in 2010 they have fallen in love with this paradise, which they take as a vacation spot to relax from the lifestyle they lead in the city.It was in 2018 when he decided to put his first sale point in the magical Tulum in Carretera Boca Paila Km 7.5 just behind Mur Mur, one of the most delicious restaurants in the area. We invite you to discover this beautiful jungle shopping paradise, La Placita, just beh... 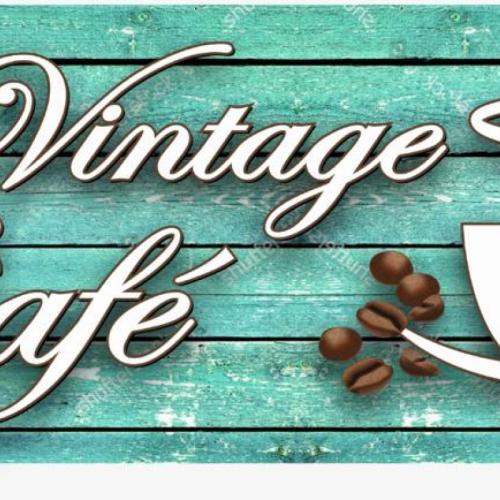 Name:Alfredo BosquezBusiness:Vintage CaféCharge:Manager.What kind of business do you do in Aldea Zama?Cafeteria Restaurant.Have you chosen this place because it is in the middle of the Jungle?Yes, because Tulum is a formidable place full of nature, with diverse people and opportunities for everyone, where you live in peace, you can work and also have fun.Projects for 2020?To grow the business by consolidating it and making it successful and recognized so that it continues to be liked by the people.How do you see the development of Tulum in general and of Aldea Zama in particular?Tulum&#...

THE WORLD ACCORDINGLY TO —- Laetitia Vagner creative founder of Renée.V  First of all tell us a bit more about you, where are you from and how you ended here in Tulum?Ok, so, I born near Paris in France but I would say it is not representative of my personality. I first came to Tulum for 2018’s New Year’s eve, for vacation. I was not even a designer yet. I was just finishing my study. Coming toTulum was a dream, so I took a one way ticket. That’s how I ended up here. Since then I come every year.  Describe your business/yourself in 3 word...

Spending a night in Tulum is a unique occasion to enjoy the range of gastronomic offers  that allow us to deepen our journey inside Mexican food and its contaminations with mergers into Mediterranean and international dishes and cuisine.We can start in LA CHULA a, in the town on the road that takes us to the beach zone, the specialties is the fish present in the restaurant, its 1 one of the only 2 Tulum's restaurants ranked between the 20 best restaurants in Messico.If you go to the beach we recommend TABANO if you want to try the original passion they put into foo...

We know a bit about you, where are you from and where do you live?I was born in Rome,Italy but  moved out when I was 19 years old, I went  to the Canary Island first and to Ibiza after where I live since the year 2000. As most of the Ibiza residents, I have been spending my last 14 years away during the the winter. Mostly  between United States  Miami and Mexico Tulum. Are you a DJ or you also a producer?I started DJing in 1989 during the rave scene in Italy and I have been practicing with friends in the studio since 1992  before owning my own studio,rad... 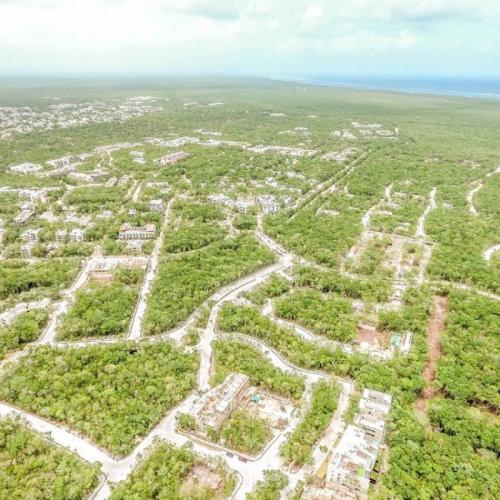 If we read the words from  the website it’s mentioned that “The creation of Aldea Zamá is a bold step that defines modern life in the Riviera Maya, fusing Tulum's origins and mysticism with contemporary lifestyle"  for sure we already understand that we are in front of a "majestic ecotourism and residential project" while keeping the feeling of living in the jungle.  Aldea Zama is located in Tulum, in a central area by the fishing village, you can enjoy bike tours to the archaeological zone, hotel zone, the beach, the town of Tulum, and...

Name:Matteo Squadrin.Business:Mayahuel.What kind of business do you do in Aldea Zama?It’ a Boutique Hotel with a  Mezcaleria and a Restaurant.Have you chosen this place for being in the middle of the Jungle?We chose this place for being in the middle of nature and for being inside Zama Village, the most chic residential area of ​​Tulum.Projects for 2020?Opening of the hotel around the eastern Week, opening of the restaurant by May 2020, opening party and the beginning of our events calendar (tastings of mezcal, live music, art events).How do you see the development of Tulum in g... 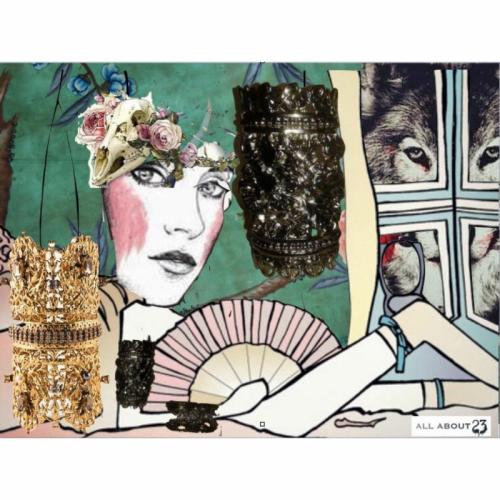 Uncovering the unique fashion style and boutiques in Mexico's Sexiest Destination: Tulum. Tulum is no longer one of Mexico’s best-kept secrets; this place has transformed into one of the most Instagrammed places in the world. However, at the same time, it managed  to hold onto its Mayan tradition, natural materials and high vibrations.Once a jungle, Tulum has bloomed into a series of hotels, restaurants and amazing boutiques. Wooden structures that seem suspended in the air where avant-garde unique dresses, hats or jewellery bags are framed like a painting. In Tulum you hav... 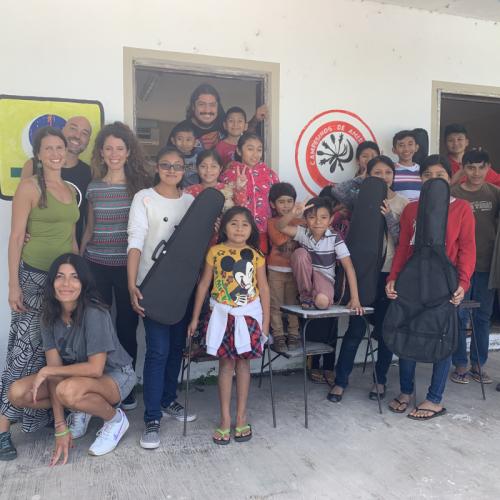 PAAX IN HÁ means "Music in my water" in the Mayan language, the "water" being the metaphor of the territory in which the project is being developed, where you can finds the world's largest underground aquifer, a unique territory in the globe that deserve special care and attention. With this, we place environmental education as a cross-cutting theme in all areas, in parallel to music and the psychosocial accompaniment that will be provided to all the participants to ensure their full development.The organisation is focused on strengthening the cultural ... 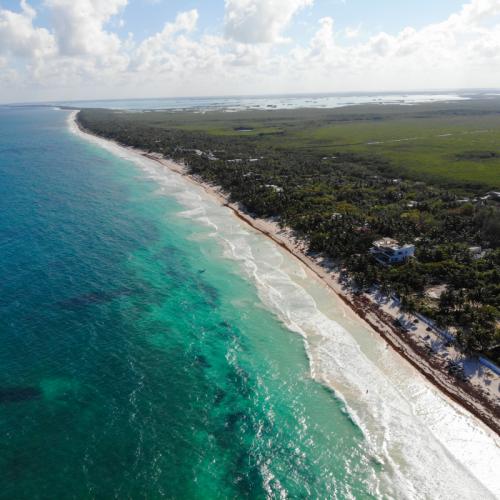 Name?Luca PierisWhere we are?We are at Tulum Beach in Quintana Roo Mexico. In Dos Ceibas Eco Retreat. I am the manager of this ecological hotel on the plain of Yukatan.How have you decided to be the manager of Dos Ceibas?I really haven't decided anything.Life has brought me here.So what took you here in Tulum?I came here to help my aunt, my mother's sister. I am from Verona Italy.I have studied administrative to work in a bank like my father, but immediately after finishing my studies I wanted to make an experience as a  trainee and I went to Australia for two years. I l... 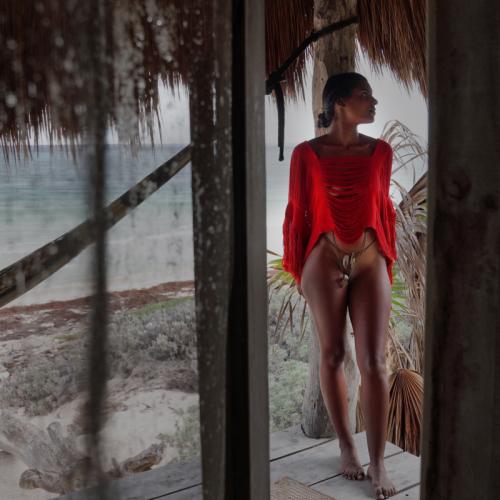 Firstly, tell me a bit about how and why you started your store/brand?After traveling and meeting very interesting people I decided to give life to Lolita Lolita. One day I woke up in Tulum thinking that I had the most amazing heritage from my mom; grandma’s skincare formulas.My grandma taught her daughters how to make their own lipsticks, face mists, hair shampoo, body lotion, etc. Before meeting my grandpa, she learned how to make her skincare products from a boyfriend who was a chemist. Then she kept making them for the rest of her life for family and friends. Lolita Lolita Tulum... 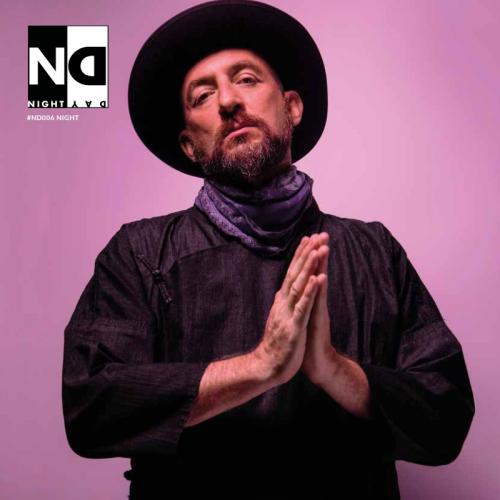 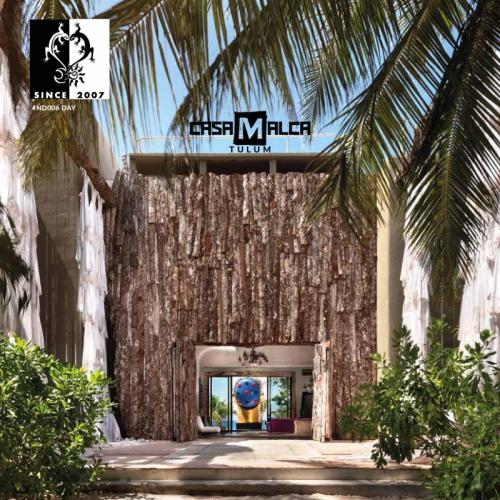 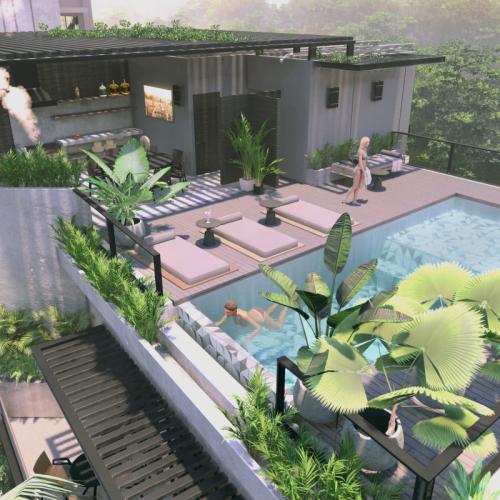 Meet Rosa de Plata -A Paradise in Paradise! A beautiful complex in the jungle!If you want to live your dream this is the perfect way Rosa De Plata is the change of lifetime inviting those fortunate few to enjoy a life without limits when you live surrounded by unending vistas of the jungle.Few words to describe ROSA DE PLATA are:“MINIMAL, URBAN, SOPHISTICATED WITH AN INDUSTRIAL JUNGLE TOUCH”.Located in a residential area of high surplus value. Rosa de Plata has offices, shops, promenade of roses, one bedroom units and the most exquisite and unique penthouses in the area with the la... 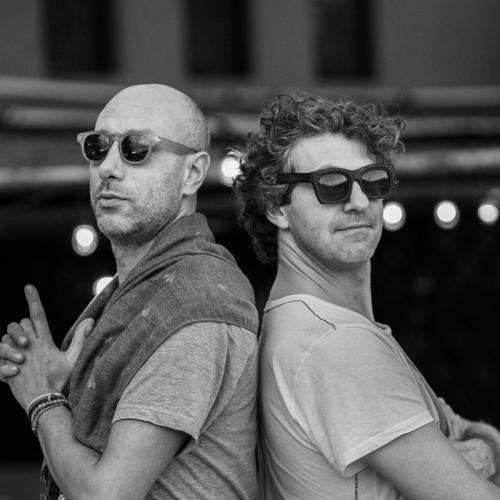 Thanks Tulum, thanks IbizaDear reader of ND, being Night or Day is almost a philosophy, it is a mixture of Undrerground and Mainstream, in black and white. A person ND loves Music, respects Natura and lives enjoying or creating every day Culture influenced by the first two as well as our contents.We would like to thank Tulum, and with Tulum we intend the people, workers, clients and friends that since we started talking about our project have helped us, supporter and the result is the magazine you have in your hands.This feeling is the mission he had in 2005 when he began to move the first ste... 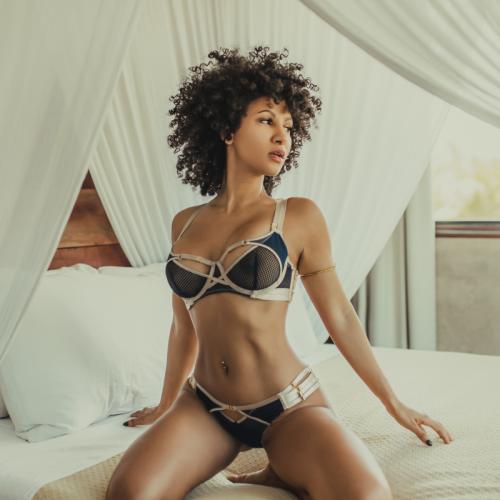 Paola Garrido photographer The inspiration to become a photographer for Paola was born between the island of Ibiza to the Jungles of Tulum. Her unique style of photography resulted in her being approached to shoot a campaign for Tulum’s hottest new clothing sensation, “Dirt in the Dust”. Dirt in the Dust is an exclusive costumier, which has encapsulated the ethos of Burning Man and infused it with the ever popular dress up culture of the Rivera Maya. Sian: “Paola has a way of creating images that have a cinematic, storytelling feel to them yet she manages... 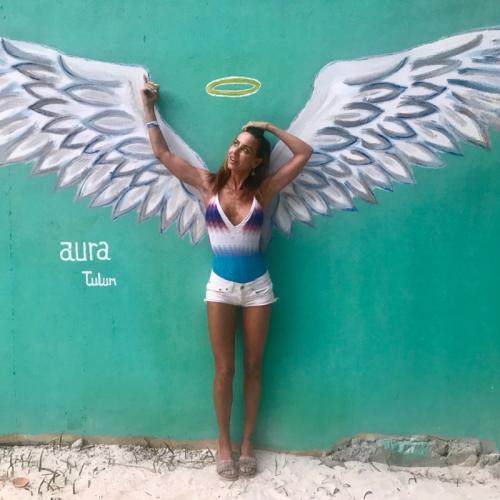 What does the idea of influential woman mean to you?A wise and trusted woman that has earned this status from her piers and within her community. A woman whom is passionate about what she does and embodies what she believes in. A builder, a doer, a fearless leader that has a vision and makes things happen in the world. Do you consider yourself to be an influential woman?Yes, I do. I have mentored, guided and coached hundreds of staff members over the past 20 years throughout all my businesses. In addition, as a mother of 3 children and friend to many, I consistently provided ins...

Escape the ordinary hotel and come Experience the Real Tulum Dream at Playa Mambo.The Ocean Front Boutique Bohemian Chic Hotel is located in the Heart of Tulum. Located exactly where you want to be, directly on Tulum Beach. We offer the Best location in the Heart of Tulum, you can walk everywhere, to shop, eat, enjoy, no car necessary.We only have 11 rooms, your own private paradise ALL for you.Located directly on Tulum beach, we offer Ocean Front & Beach side cabanas, and three different room categories to choose from that are affordable. With only 11 rooms, Playa Mambo offers a...

Lisa Torchio Napoli grew up in Italy, moved to London for nearly 20 years and now lives and works in Ibiza, Spain. Her passion for art began at a young age.After many years of painting in acrylics, LTN moved forward, experimenting collage, water colours and make up.This pushed her to expand her horizons and tap into new areas of painting she had not yet explored.There was an obvious freedom and personal expression with her female portraits and it was then that she really began her journey.Her colour-explosive and chaotic female character portraits are often “stolen” from magaz... 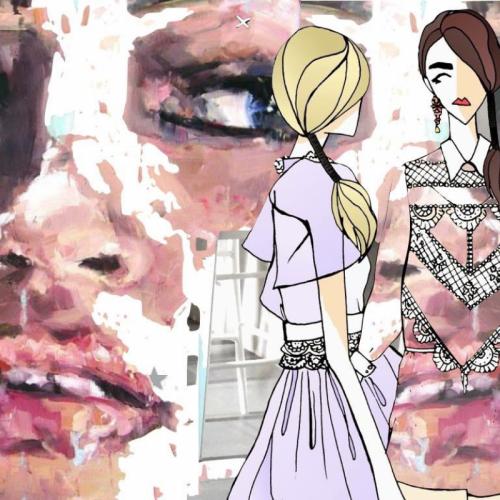 Coco Chanel once said: “A girl must be two things: elegant and fabulous.” This advice from one of the most famous fashion designers in the world is as inspiring today as it was in the 1920s. While Chanel pioneered the races, there is now no shortage of inspiring women at the top of their fields. Here are the interviews of the Women of Tulum.In 2019, women around the globe took action, claiming leadership positions in government, business, philanthropy, media, creating their own art and businesses.Here the Tulum Ladies. These women are not to be messed with...DESIREE DUMONTMELISSA P...