Born and bred in Argentina, cooking has always been his passion and after graduating at the Instituto Argentino de Gastronomía he started working for a few years in his native country.

After a while he felt the need to move to Europe in order to extend his culinary knowledge. And its exactly in Europe, in Spain to be precise where Maximiliano met the most influential figure of his career: Martin Berasategui. He was hired as an intern at Martin’s 3 Michelin star restaurant.

He was involved in the opening and supervision of 4 more restaurants under the Martin Berasategui firm in America. And guess what? We are now so lucky to have him here for us in Tulum.

We really cant wait to try his delicious food.

Gastronomic Ambassador of the Mexican Council for the Promotion of Fishery and Aquaculture Products (COMEPESCA).

Member of the Maya Collective (Fishing with a Future).

Participation in various Gastronomic Congresses, Culinary Festivals and Universities throughout the Republic. 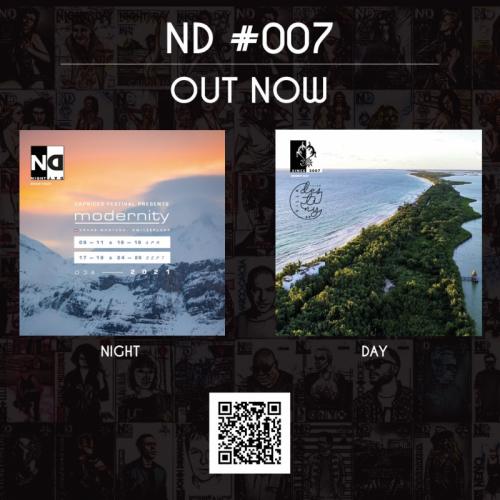 PAAX IN HÁ means “Music in my water” in the Mayan language, the “water” being the metaphor of the territory in which the project is being developed, where you can finds the world’s largest underground aquifer, a unique territory in the globe that deserve special care and attention. With this, we place environmental education as a cross-cutting theme in all areas, in parallel to music and the psychosocial accompaniment that will be provided to all the participants to ensure their full development.The organisation is focused on strengthening the cultural iden...

In ND 006 we have met Giuliana Cordara from Kaahal Home, who together with her partner manage this beautiful lyfestyle shop in the town of Tulum. Let’s meet her ...What is your name?My name is María Rosa Camps, but everyone calls me Roseta. Where are you from?I am Spanish, from Catalonia. First, tell me a little about Kaahal’s philosophy?It is a place to promote the best crafts in Mexico, young Mexican artisans and talents. All articles are carefully selected by my partner Giuli. How and why do you work together, is it the first project together?It is the first pro...

IBIZA MONTHLY SPECIAL PRESENTING A UNIQUE VILLA: VILLA PURA VIDASituated in a privileged location this villa offers the best views of the sea and sunset while offering privacy and comfort.It is decorated with the best taste and elegance while maintaining its coziness .Five suites, one of them with a private pool, a separate guest house with two more bedrooms, two jacuzzis,several chill-out areas and much more is offered by what will undoubtedly be the Star Villa of 2021, it will also have a leisure area with a bar and an unrivaled sound equipment to satisfy even the most demanding.For more inf...

Zamna A.C. Foundation it’s about real, daily support. Its mission is to visit weekly the different Mayan Communities of Tulum in search of real problems to give them support . Knowing face to face and in depth is the best way today to attack the problems suffered by the Mayans starting from the roots.They support people and organizations, especially those that protect women and children, the most vulnerable in the Mayan Communities. Always trying to raise awareness about: the future, long- term objectives such as educating, teaching and generating employment.Real and permanent support. S...

On September 25, 2015, world leaders adopted a set of global goals to eradicate poverty, protect the planet, and ensure prosperity for all as part of a new sustainable development agenda. Each objective has specific goals that must be achieved in the next 15 years. To achieve these goals, everyone has to do their part: governments, the private sector, civil society and people like you.The Sustainable Development Goals are a universal call to action to end poverty, protect the planet and improve the lives and prospects of everyone, everywhere. The 17 Goals were adopted by all UN Member States i...

Signature cuisine that tries to experience seasonal foods of local origin cooked over a wood fire, enhancing its flavor and maintaining a connection between food and the earth.Zamna Eco Boutique Hotel & Restaurant opens its doors on December 31 with a Pop-Up by the great Chef Maximiliano Sola, 5 AAA Diamonds and two Michelin Stars together with Martín Berasategui, who will bring his new FIRE concept. A culinary experience for the five senses using the most primitive cooking method: the Wood Flame. Zamna Eco Boutique Hotel is a paradisiacal space of 11 hectares in the jungle of Tulum...

We know a bit about you, where are you from and where do you live?I mostly live between Tulum, Uk and Ibiza. Are you a DJ or you also a producer? I produce a lot of music, but nothing much that crosses over into the music I play generally. I love ambient and generative music, I like drones and tape recorders, I also record plant music with my project Jungle Sound. What have you learnt since you started out as a DJ /Promoter? Sounds like a cliche, but it’s the journey that is important, and not the destination. Why should someone who doesn’t know you listen to your mu... 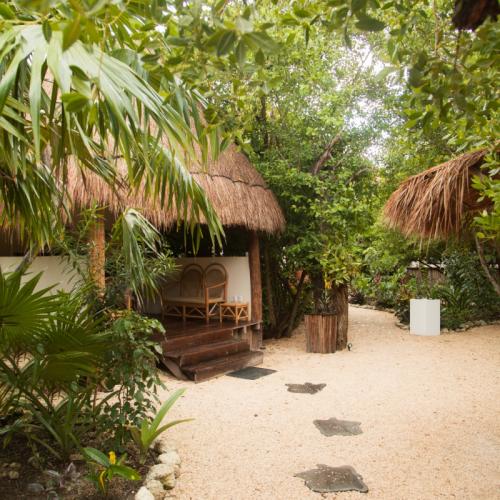 Boutique hotel with 11 spacious rooms in 4 modern cabins with a design that alludes to Mayan architecture. Staying in our rooms will allow you to contemplate the sublime nature of the jungle that surrounds and enjoy exquisitely decorated spaces. In our facilities, lies the possibility of being enchanted by wonderful views full of life, balance and freedom without giving up luxury, elevation and splendor. Each room will surprise you with a work of art at the head of your bed, not forgetting the memorable view that you will have every day when you wake up. In addition, Casa Teka has an excellent...

Villa Destiny Tulum is located on a plot of approximately one hectare in the Sian Ka’an Reserve (in Mayan: Sian Ka’an = ‘gate of heaven’) which is a protected national park that is located on the Caribbean coast of the state from Quintana Roo, in the Yucatan Peninsula of Mexico. In front of its beaches are a collection of coral reefs that are the world’s second largest, after the Great Barrier Reef in Australia. It was declared a World Heritage Site by Unesco in 1987.Whether you are looking to disconnect or reconnect, Villa Destiny Tulum offers contemporary Mayan ... 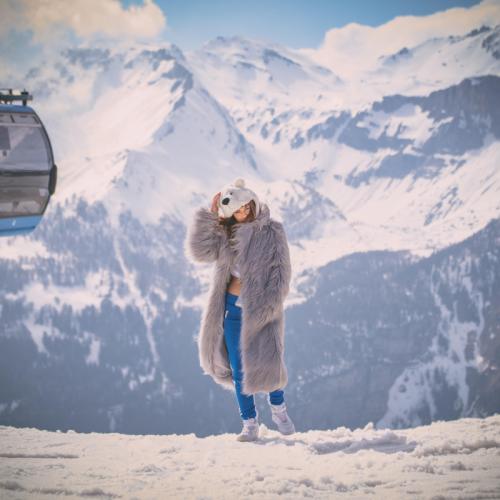 We would like to know a little more about you, where are you from and where do you live? Hello, my name is Maxime Leonard and I am the founder of Caprices Festival in Crans-Montana, Switzerland. I grew up in a ski-resort of Crans- Montana and about 17 years ago I moved to Lausanne on the shores of Lake Leman near Geneva.Caprices has been going on for more than 16 years. How and where was the idea of Caprices festival created?Back in the 70s and 80s, Crans-Montana was the most popular ski-resort in the world, but the late 90s early 2000s it saw a decline in tourism. This is when me and my four ...

The three labels of Mitre Mezcal cover different consumer options by offering a drink made with high production standards. Tasting each one of them results in a magnificent sensory experience. It is the perfect option for end-of-year meetings in company of family and friends. In addition, the bottles provide the possibility of becoming a great decorative collectable piece and a perfect gift.No less important fact, Mitre Mezcal proudly represents the fusion of contemporary Mexico with the artisanal and traditional, a jovial and fresh spirit accompanied by a unique identity,ideal for the most de... 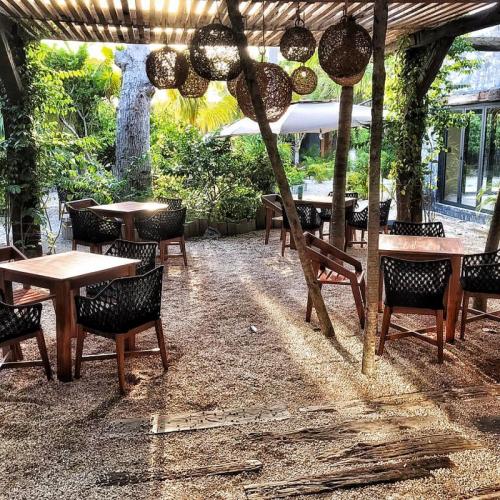 Muyal translated from Mayan as “cloud of heaven and miraculous thing”; words that fit perfectly as what we want to create with our customers, miraculous and heavenly experiences.Is a magical space, that gathers vegetation, climate, and a spectacular natural cenote of pure crystalclear water in a mystical mayan environment.Muyal Tulum opened in 2020, it arose from the need to reconnect our lives and emotions with nature, and to enjoy the best thing we have in Mexico; yes, the gastronomy. Muyal brings its visitors to an Oaxacan experience with one of its typical dishes such as tlayud...

Sabio Tulum opened in 2020, it emerged from the idea of creating new recipes with expert chefs who love the art of cooking.We combine cultures and traditions through dishes that stand out for their great flavor and originality. Experts in gastronomy and signature cuisine, we’re a Mexican fusion cuisine that merge contemporary recipes with pre-Hispanic touches.We use ingredients from different parts of Mexico to present a totally innovative culinary proposal with the cleanest flavors that delight even the most demanding palate.Our menu captures the very best of both, land and sea, cooking...

Born and bred in Argentina, cooking has always been his passion and after graduating at the Instituto Argentino de Gastronomía he started working for a few years in his native country.After a while he felt the need to move to Europe in order to extend his culinary knowledge. And its exactly in Europe, in Spain to be precise where Maximiliano met the most influential figure of his career: Martin Berasategui. He was hired as an intern at Martin’s 3 Michelin star restaurant.That moment has led him to be involved in most of the projects of Martin Berasategui all around worldand other ...

ITZIK TULUMA CELEBRATION OF FLAVOR AND LIFE ITZIK embodies the cheerful celebration, Mediterranean food, and bold middle eastern flavors from hotelier and restauranteur Yves Naman’s European childhood and Israeli heritage.ITZIK, a derivative of Isaac and Yves Hebrew name, means he who will laugh. Much more than laughter and cheerful music, sharing food is a celebration of life.Lovingly prepared by award-winning Chef Cesar Castañeda, the concept has evolved to honor local bohemian vibe, fresh and sustainable Mexican ingredients, and custom made mezcal cocktails by Nakawé Mez...

SUSHICLUB: SUSHI & JUNGLE A BENCHMARK FOR SUSHI, ASIAN CUISINE AND QUALITY SERVICE.With more than 20 years in the market, we offer you an immersive experience, focusing both on our avant-garde and exclusive flavor combinations, as well as creating a unique atmosphere for you.Our custumer from Tripadvisor:“SushiClub is a beautiful and very unique place, the service is taken care of in every detail and the atmosphere is perfect”“A sushi with a lot or personality. It was very fun how they flamed and smoked the rolls in our table” “10 out of 10! Amazing ...

ITZIK TULUMA CELEBRATION OF FLAVOR AND LIFE ITZIK embodies the cheerful celebration, Mediterranean food, and bold middle eastern flavors from hotelier and restauranteur Yves Naman’s European childhood and Israeli heritage.ITZIK, a derivative of Isaac and Yves Hebrew name, means he who will laugh. Much more than laughter and cheerful music, sharing food is a celebration of life.Lovingly prepared by award-winning Chef Cesar Castañeda, the concept has evolved to honor local bohemian vibe, fresh and sustainable Mexican ingredients, and custom made mezcal cocktails by Nakawé Mez...

Start and end your vacation in Tuk!A living community of art, culture and gastronomy Explore your emotions through Tuk experiencesThe first cultural and gastronomic epicenter of Tulum, Welcome to an epic experience where luxury meets the unique vibes of nature, art and the exquisite flavors of a wide world-class gastronomic offer.Tuk Tulum Art Walk, is a living community, a gastronomic, artistic and cultural route that invites you to be part of a different Tulum, the only space where you can find everything you need; From a cultural event that takes you out of the routine to gastronomic festiv...